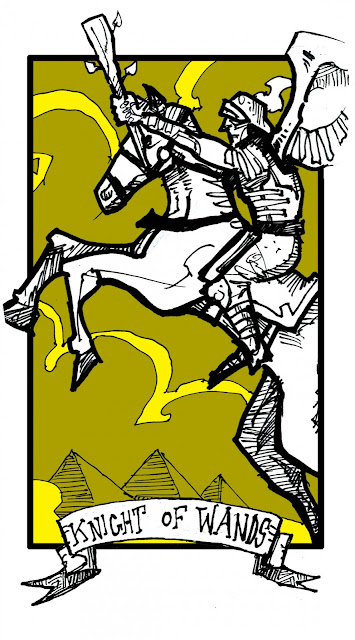 This young man is a traveler or an immigrant. He might be fleeing from something, but probably charging towards something.


He is a Flying Hussar of Jan Sobieski III.


The workings of Air by a special and mighty agent--for this the knight is in all cases--on the houses of water, here the Fourth and the Twelfth, causes turbulence, motion, emotion (though it must be borne in mind, that it is not emotion in itself); the action of the air on the water causes waves. In the case of the fourth house the knight relates to family matters or household conditions, eventually the father, to internal conditions in society or groups of people. It must further relate to memories and the past in general, because it means the awakening of the sentiments. The traditional conclusions have been drawn evidently in the negative for the greater part, in consideration of the fact that the sentiments generally are misleading. That they give reason for many changes is quite true. In the case of the twelfth house this is much the same. But extending its result over a much larger circle, the mercurial knight may represent expedition and exploration, discovery, scientific or practical, emigration, estrangement, and the 'great work' of transmigration. It denotes a searching for the unknown, which in weak personal cases may appear as indiscretion or premature revelation, divulgation, profanation, etc. We do not see why this knight should be either young or friendly.- General Book of the Tarot by A.E. Thierens

Listen to "The House of Air: The Tarot of Wands" on Spreaker.

Popular posts from this blog

Let's take a look at how the blueprint works! Here is the TAROT it lays out the cyclical mechanics of the tarot cards. The T starts at the 1st position and moves to the A at the 2nd position, which then goes to the third position, and then the O in the 4th position. However it is not complete, and finally ends back at the 1st posi…
Post a Comment
Read more

The Emerald Tablets of Thoth The Atlantian

February 05, 2020
This is a great story! The text says you must read the Emerald Tablets out loud, well mission accomplished! It is amazing just how many awesome lessons are hidden in and among the wild story of Thoth the Atlantean! These are lessons that can and probably should be applied to every days life. There is also a few new ways to look at our own personal reality in here!

Wisdom is power. Don't take pride in your wisdom. talk with ignorant people as well as the smart people. Speak up against evil.Follow your heart.Do more than what is demanded of you.Spend your money the right way. Share your resources with your friends.Seek out a spiritual guide or mentor. Those who are guided don't get lost, but those who are lost cannot find the right path.Don't listen to gossip and mind your own business. Silence is great.The senses are illusions. Turn thy thoughts inwards to find enlightenment.Light is the heritage of humans. Darkness is only a veil, a lie.
We go over the whole text, and then …
Post a Comment
Read more

February 07, 2020
The Fool
Observe this purple haired millennial walking off the cliff as he is transfixed with his device. On the screen we can see the four shapes that form the four Alchemical symbols of the elements an upright triangle for fire. An upright triangle with a line for air. An upside triangle for water. An upside down triangle with a line for earth. These elements are integral to the minor arcana and each one sorts with one of the suits. The Wands are the house of air. The Cups are the house of water. The Swords are the house of earth. The Coins are the house of Fire.
These elements also come together to form the Star of David, which links this character, who is immature, spiritually dumb and unexperienced here at the beginning of his journey to the enlightened Hermit later in the deck.

The Fool here has an unearned swagger, confidence and carelessness. Not in a stoic way, he is careless and overly confident in his ignorance and inexperience.
He is a representation of any normal man in th…
Post a Comment
Read more