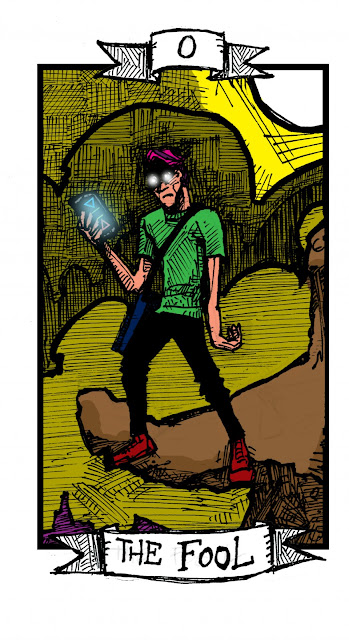 These elements also come together to form the Star of David, which links this character, who is immature, spiritually dumb and unexperienced here at the beginning of his journey to the enlightened Hermit later in the deck.

The Fool here has an unearned swagger, confidence and carelessness. Not in a stoic way, he is careless and overly confident in his ignorance and inexperience.

He is a representation of any normal man in the natural state of his being. Driven by his  material needs or desires. A slave to fate and a victim of the cruel and terrible universe around him.


We will note that the fool card doesn't fit into any of the three septrernaries of the Major Arcana.

Listen to "The Tarot of the Major Arcana 1: The First Septenary" on Spreaker.

Popular posts from this blog

Let's take a look at how the blueprint works! Here is the TAROT it lays out the cyclical mechanics of the tarot cards. The T starts at the 1st position and moves to the A at the 2nd position, which then goes to the third position, and then the O in the 4th position. However it is not complete, and finally ends back at the 1st posi…
Post a Comment
Read more

The Emerald Tablets of Thoth The Atlantian

February 05, 2020
This is a great story! The text says you must read the Emerald Tablets out loud, well mission accomplished! It is amazing just how many awesome lessons are hidden in and among the wild story of Thoth the Atlantean! These are lessons that can and probably should be applied to every days life. There is also a few new ways to look at our own personal reality in here!

Wisdom is power. Don't take pride in your wisdom. talk with ignorant people as well as the smart people. Speak up against evil.Follow your heart.Do more than what is demanded of you.Spend your money the right way. Share your resources with your friends.Seek out a spiritual guide or mentor. Those who are guided don't get lost, but those who are lost cannot find the right path.Don't listen to gossip and mind your own business. Silence is great.The senses are illusions. Turn thy thoughts inwards to find enlightenment.Light is the heritage of humans. Darkness is only a veil, a lie.
We go over the whole text, and then …
Post a Comment
Read more